GPCRs transmit information within cells via two major signaling pathways: regulation of cAMP levels and increases in intracellular Ca2+ triggered by inositol 1, 4, 5- triphosphate (IP3). These signaling pathways are activated by specific G protein associated with the receptor. Activation of Gs or Gi coupled receptor results in an increase or decrease in cAMP levels, respectively. While activation of Gq coupled receptor activates phospholipase C (PLC), which converts PIP2 into DAG and IP3. The metabolic pathway of IP3 is very complicated, as IP3 can either be directly hydrolyzed or be first phosphorylated to generate D-myo-inositol 1, 3, 4, 5-tetrakisphosphate (IP4) before being degraded. These processes involve several phosphatases, leading to the formation of D-myo-inositol bisphosphates (IP2) and D-myo-inositol monophosphates (IP1), which can be phosphorylated at different positions on the inositol ring. Finally, inositol monophosphatase (IMPase) degrades IP1 into myo-inositol.

However, the very short half-life of IP3 makes its assessment too challenging for drug screening operations. Recently, a new homogeneous time-resolved fluorescence (HTRF) assay, detecting the downstream metabolite of IP3, inositol monophosphate (IP1), has overcome the shortcomings of the IP3 quantification, allowing it to be used for primary or secondary screening. HTRF is a time-resolved fluorescence resonance energy transfer (TR-FRET)-based assay system, and is increasingly used to analyze various molecular interactions and binding studies. The assay is based on energy transfer between a long-lived europium or terbium cryptate donor and a variety of red or green acceptors, combining the advantages of FRET and TRF.

Creative Bioarray has developed a highly accurate HTRF assay for measuring IP1 in HTS format. The non-radioactive method for IP1 accumulation is called IP-One HTFR assay, which measures reduction in energy transfer between acceptor IP and a europium-conjugated IP1 antibody and has been applied for high-throughput screening in 1536 format.

The IP-One HTFR assay using lithium chloride (LiCl), which inhibits the degradation of IP1, and a fluorophore-labeled IP1 specific antibody, has proven effective in studying Gq coupled receptor activation and constitutive activity. This IP-One assay measures the accumulation of IP1 instead of the transient second messengers IP3 and IP2 and is proven effective as a surrogate measure of GPCR activation. The detection is based on competition between acceptor-labeled IP1 and IP1 produced by the cell. 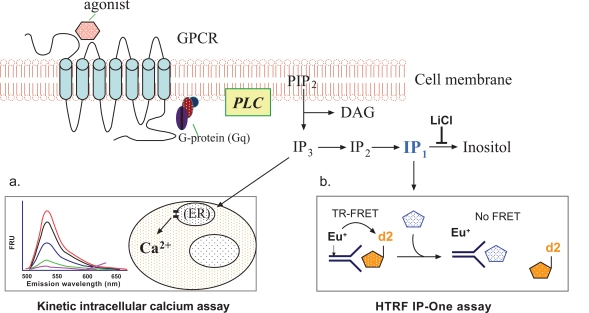 Figure 2. Schematic diagram of the principles for the intracellular calcium assay and the IP-One assay.