The Role of Glycosylation in Antibody Research

The Role of Glycosylation in Antibody Research

Antibody glycosylation is aimed at selectively regulating speciﬁc antibody functions. Glycosylation of proteins is a remarkably dynamic post-translational modiﬁcation that governs the biology of the majority of cell surface and secreted proteins. The antibody glycan is composed of a biantennary core heptasaccharide composed of a chain of 2 N-acetylglucosamine (Glc NAc) residues, followed by a mannose, followed by a 1,3 and a 1, 6 mannose branching and an additional Glc NAc residue on each mannose. 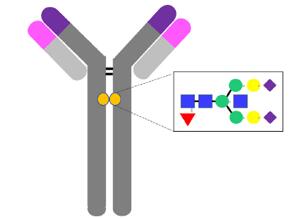 Changes in galactosylation have been widely documented. A breakthrough study points that galactosylation shows unique age-distributions with G0 (no galactose residues) antibodies enriched in the very young and the elderly. The level of galactosylation increases during pregnancy, with a significant improvement in galactosylation and sialylation and decreased bisection that normalizes post-partum. In addition, Fc-glycosylation also varies signiﬁcantly across geographic regions of the world, and again is dramatically altered in autoimmune and oncological diseases.

Significant differences in antibody glycosylation are observable on antigen-specific antibodies. Moreover, beyond antigen-specific differences, Fc-glycosylation changes are more profoundly altered at the site of disease, where more dramatic differences are observed in IgG Fc-glycosylation in the synovium during rheumatoid arthritic disease and within the cerebrospinal fluid in multiple sclerosis. Yet the functional consequences of these different binding proﬁles are most clearly illustrated in the context of disease. Besides, the broad impact of intravenous gammaglobulin (IVIG) has clearly illustrated the critical nature of antibody glycosylation on inflammation. Moreover, both in vivo and in vitro data clearly highlight the critical role of IVIG in reduced B cell activation via direct interactions with CD22 during B cell signaling.

Given the intimate role of galactosylation in tuning antibody effector function, including complement activation, it is plausible that alteration in galactose levels is a non-speciﬁc mechanism exploited across diseases to rapidly drive immune complex clearance. However, because these complexes persist, chronic immune activation likely also contributes to the pathology of many autoimmune diseases. Antibody glycosylation is inﬂuenced by the immune state. Speciﬁcally, chronic infections also induce chronic inﬂammation and are marked by a loss of galactosylated antibodies. Moreover, further studies highlighted that this expansion of galactosylated antibodies occurred in both individuals with progressive HIV infection off therapy as well as in those that spontaneously control HIV infection, despite lower levels of immune activation beyond inﬂammatory glycan changes. Additional changes were observed within the antigen-speciﬁc antibody compartment, associated with enhanced functionality in HIV infections.